This is the Wilco record to get. It sounds like unreleased Velvet Underground tracks played by the Electric Light Orchestra. The country sound that had defined Jeff Tweedy’s recordings up to the point this album came out is dicarded entirely. Something like psychedelia is attempted but not quite reached. Where psychedelia came from psychedelic drugs like LSD and marijuana, this sounds more like the work of people on larger than recommended doses of prescription painkillers. Everything on the album is recorded clean then coated with the sort of cotton candy swirl that had made the sound of The Soft Bulletin by The Flaming Lips a little while earlier.

The lyrics are much darker than on previous Wilco albums. There’re lots of hopeless pleas. “I know that we’re just friends.” “Maybe all I need is a shot in the arm.” It’s blurry where Tweedy ends and the character sketches begin. His crackly not especially melodic voice is multitracked. The effect is not like on earlier examples of multitracking on LPs. Where a David Bowie track would use two tracks of Bowie singing to make his thin voice sound more soulful, the multitracking on Summerteeth just seems to accentuate the cigarette cracks in Tweedy’s throaty delivery.

The relationship between the band, producer Jim O’Rourke, and particularly the relationship between Tweedy and the now deceased Jay Bennett seems in fullest bloom. Left to his own devices, Tweedy’s genre experiments tend toward rather flat production. They sound like B-sides. Wilco The Album was, whether it thought itself to be such or not, whether the songs had appeared as flipsides to anything else prior, a collection of b-sides-at least in spirit. Summerteeth is a cohesive statement by a band at the archetypal height of their powers.

Lyrics shift between half hearted statements seemingly taken from soda jingles and the sort of self-help books sold at gas stations and bewildered accounts of murderous fantasies of the id. Lyrics like “I’m a bomb regardless”, and “I dreamed about killing you again last night” pop up in the otherwise more subtle lyrics surrounding them meant to convey a contradiction-an energetic tension between the resigned gallows humor of the vocals and uplifting nature of the statements being uttered. Most lyrics on the album are structured around a series of these common phrases until they’re betrayed at the end of a stanza or in their last repetition as a verse by a slip, such as in the much remarked upon “She’s a Jar.”

The sound is cotton candy with the attendant tooth rot. Highly recommended. 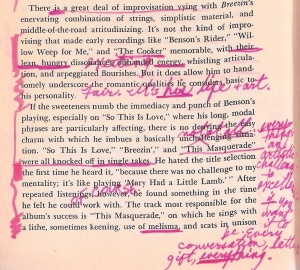 I saw it again. There it was. I went to the margins with my mechanical pencil, set to scribble as was my wont. And in the margins already scrawled-the note I was going to leave.

I would’ve taken it as a happy coincidence, a signpost from a fellow traveler, and the first 16 times it happened I did. I had those silly teenage daydreams some beautiful mousy woman who sat somewhere else in the library was leaving coded messages and watching me, the desire in all of us to be loved, to be lusted after in a manner of reserve and sophistication…to have our personal paranoia vindicated, the full package, was somewhere if I could just crack the code (was it even a code?)-had I been able to annotate my daydreams it would’ve read “cliche…banal…”

But dreams are only tangible the way water snakes are, and my attempts to grasp, to encapsulate, to fashion the right scab so I could pick it, only made it more irritated.

The library was so quiet you could’ve heard crickets had there been any left.

Who else would be studying these esoteric topics? The library no longer had a card catalogue, so it was a slim chance that I could ask them and find the phantom commentator.

I looked around the library and saw only one other person, an elderly man looking over baby board books to check if they had dirty stuff before taking them home to his child. His children? He wasn’t the woman in the dream. I didn’t bother engaging.

If she could’ve followed my tracks, she must be my equal-no one else could’ve gone this far down the rabbit hole without some genuine interest. Maybe they could. Maybe they just did so out of a masochistic professionalism I couldn’t fathom. I barred this speculation. It flirted with the unknowable.

The little circles that dotted her “i”s…

But there could only be one. I’d worked too long and too hard on this. She…whatever it was couldn’t beat me to the finish line on this research. I needed to find her before she knew I was looking and end it all.

It’d be bittersweet with overtones. Like when spies kill each other in the movies.

I took the first step and, checking my peripheral vision, asked the desk clerk if I could get the name of whoever had checked out all these books. He pulled up the records. For most titles, I’d been the only person ever to take them out.

Was it the truth or a cover-up? A false flag?

Had I, this entire time, simultaneously wanted to fuck and kill my forgotten self?

Of course I had. I always had.

How had I forgotten?

I realized the strange thing today, that I’m going to “find America”, as the boomers would say, in a Japanese car. The car itself has gone across the country several times before, and as such might lose interest halfway through, on the grounds of “been there, seen that.” Let us hope it doesn’t come to that.

I’m staying with my friend Paul, who is an incredibly gracious host and has been covering expenses. There’s an Australian chain that recently expanded to New York City that sells miniature pies around the corner from his apartment. He gives me the little bits of gossip around the neighborhood. There’s another shop nearby that advertises itself as “The Originator of the Six Foot Hero”, which was apparently owned by a couple who split up. The fight over who would get to keep the distinction was apparently intense. I think he said the wife got to keep it? So the husband is out there somewhere, now with the superlative “Another Shmuck Who Sells Six Foot Heros”. I live for odd little bits of regional gossip like that. The further removed I am from them the more I seem to appreciate them. He invited me to speak at a workshop he organized at the Left Forum yesterday and it went well. He was discussing his academic research into the place of emotions systems in whether someone takes action on a political issue or not. His research showed that a perception of illegitimacy of a group was more likely to cause someone to take action against said group than a perception of legitimacy was to make someone take actions in favor of a given group.

I asked him “What’s the place of spite?” but apparently spite isn’t considered a distinct emotion in his field, so it wasn’t in the research.

One of the people who attended the workshop had organized the Strand bookstore workers into a union and has a graphic novel detailing his struggle to do so coming out soon.

At the Left Forum tables I met a couple people. An elderly woman in a bright red dress promoting socialism passive aggressively with signs with quotes by disgraced economists saying “socialism will never work” etc. etc. attached herself to me and when she found out I was a writer she said “Do good and promote” several times and seemed stuck in a feedback loop until I walked off to the AK Press table. I discussed hitch-hiking with (fill in name)

It was interesting that I didn’t see many Occupy people there, or at least not many I recognized. That may have had something to do with the registration fee for the conference. A lot of people had issues with the conference this year including 30 or so people who marched through it demanding the Left Forum provide childcare (?) for attendees. I wasn’t sure what to make of that.

Got in the first day of actual shooting. My friend Gilbert showed me the areas near the Parkchester and 138th street subway stops in ‭the Bronx. Parkchester was surprisingly suburban; I met Gilbert at the Parkchester Oval, a small private park with a very blue fountain in the middle. It felt good to finally take the camera out and start shooting indiscriminately. We walked around the area and I got shots of auto-garages, buildings, and parts of a housing project.

‭In the housing project we struck up a conversation with an older guy named Jackson. He went on a tangent about what he felt about the US. I asked if I could film him but he said if he was on camera saying what he thought he’d be assassinated. When I explained I was working on a 12 hour art film with no commercial prospects (I think my exact words were “even the NSA probably won’t watch this”) he still was unconvinced but nevertheless kept talking. “Problem is, the masses is now, they them asses, you know?”

‭Gilbert asked him about the old people he used to see around the neighborhood and why he didn’t see them around like he used to.

‭Walking I saw the same slight repetitions that characterize the NYC landscape; every couple of blocks they’d seem to loop, there’d be a 99 cent (or “discount”) store, then a Chinese restaurant, then a bodega, then a Subway or Burger King, then a Latin American cafeteria style place, a couple empty storefronts. The closer we got to water the more everything resembled an industrial park.

‭Gilbert ran across another friend who’d been his manager at Qdoba, which recently closed all of its NYC locations and had left both of them jobless for a little bit. She talked about moving to the suburbs. “I went out there and they don’t treat the employees like shit. All my people working under me (she’d gotten a job as a salaried manager at a Panera Bread), they’re giving them three, four days a week and they’re only getting 18 hours, you can’t live on that, you can’t support your family.”

‭Entering the subway to head back to Manhattan where I’m staying currently there was a guy with his eyes closed in front of a paper cup. His hands were on his ears and his head was turned down and he was doing a violent variation on the thorazine shuffle. He screamed, presumably at the voices in his head “GET OUT!…GET OUT!” It seemed odd to me that I could’ve lived in NYC long enough to become acclimated to things like that without them causing any sort of disturbance. The people on the street must’ve known him or at least been used to him because everyone was happy to just leave him be, even the owner of the business he was standing in front of.